The Film
The Filmmakers

What does it mean to be an American revolutionary today? Grace Lee Boggs is a 98-year-old Chinese American woman in Detroit whose vision of revolution will surprise you. A writer, activist, and philosopher rooted for more than 70 years in the African American movement, she has devoted her life to an evolving revolution that encompasses the contradictions of America’s past and its potentially radical future.

The documentary film, AMERICAN REVOLUTIONARY: THE EVOLUTION OF GRACE LEE BOGGS, plunges us into Boggs’s lifetime of vital thinking and action, traversing the major U.S. social movements of the last century; from labor to civil rights, to Black Power, feminism, the Asian American and environmental justice movements and beyond. Boggs’s constantly evolving strategy—her willingness to re-evaluate and change tactics in relation to the world shifting around her—drives the story forward. Angela Davis, Bill Moyers, Bill Ayers, Ruby Dee and Ossie Davis, Danny Glover, Boggs’s late husband James and a host of Detroit comrades across three generations help shape this uniquely American story. As she wrestles with a Detroit in ongoing transition, contradictions of violence and non-violence, Malcolm X and Martin Luther King, the 1967 rebellions, and non-linear notions of time and history, Boggs emerges with an approach that is radical in its simplicity and clarity: revolution is not an act of aggression or merely a protest. Revolution, Boggs says, is about something deeper within the human experience — the ability to transform oneself to transform the world.

As it kinetically unfurls an evolving life, city, and philosophy, AMERICAN REVOLUTIONARY takes the viewer on a journey into the power of ideas and the necessity of expansive, imaginative thinking, as well as ongoing dialectical conversation, to propel societal change.

Produced and directed by Grace Lee (JANEANE FROM DES MOINES, THE GRACE LEE PROJECT), edited by Kim Roberts (FOOD INC, WAITING FOR SUPERMAN, LOST BOYS OF SUDAN, INEQUALITY FOR ALL), produced by Caroline Libresco (SUNSET STORY) and Austin Wilkin (BOB AND THE MONSTER), and with a lush score by Vivek Maddala (KABOOM, HIGHWAY), AMERICAN REVOLUTIONARY: THE EVOLUTION OF GRACE LEE BOGGS, has been 12 years in the making. It incorporates a rich archival trove from the 1920s to the present and visual effects to reinforce Boggs’s statement that history “is the story of the past as well as the future.” Animated graphics by Syd Garon and Casey Ryder from Studio Number One bring Boggs’s whirring mind to life, illustrating her view that ideas are not fixed, but that once they become fixed, they are dead.

In an age when seemingly insurmountable injustices and contradictions face us, AMERICAN REVOLUTIONARY inspires concerned citizens and dreamers of all ages with new thinking to sustain their struggle and engagement. 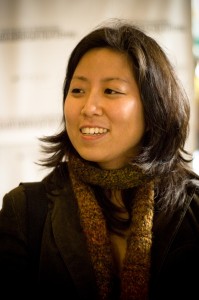 Grace Lee is a Los Angeles-based filmmaker of both fiction and documentary films. Her most recent feature film about the 2012 Presidential campaign, JANEANE FROM DES MOINES, premiered at the 2012 Toronto International Film Festival. Prior to that, she wrote and directed AMERICAN ZOMBIE, which premiered at Slamdance and SXSW before being released by Cinema Libre. She also produced and directed THE GRACE LEE PROJECT, a feature documentary on Asian American identity and stereotypes that was broadcast on Sundance Channel and is distributed by Women Make Movies. Grace received her MFA in Directing from UCLA Film School, where her thesis film BARRIER DEVICE, won a Student Academy Award and Directors Guild of America award. She is the recipient of the Henry Hampton Award for Excellence in Digital Media, a Rockefeller Media Arts grant, the PPP Pusan Prize as well as funding from the NEA, Center for Asian American Media, Chicken and Egg Pictures and the Ford Foundation. She is currently producing and directing a documentary for PBS about Asian American food culture. 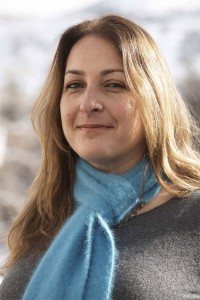 Since 2001, Caroline Libresco has been Senior Programmer for the Sundance Film Festival, where she selects features and acts as a conduit between artists and industry. She serves on the leadership teams of Sundance’s Creative Producing, Women’s Initiative and Film Forward programs. Prior to Sundance she served as an executive at ITVS, San Francisco Film Festival and the San Francisco Jewish Film Festival. Among multiple credits, along with AMERICAN REVOLUTIONARY, she produced the award winning documentary SUNSET STORY and co-wrote/produced the indie feature FANCI’S PERSUASION. Caroline serves as consultant to Hot Docs, Harvard’s Kennedy School, Zurich Film Festival, and on the boards of Women Make Movies and IDA (International Documentary Association). She holds graduate degrees from Harvard University and UCLA Film School and has appeared widely on panels and juries internationally. 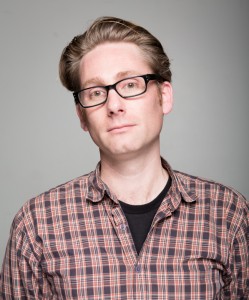 Austin Wilkin is a Los Angeles based independent producer and writer. In addition to AMERICAN REVOLUTIONARY, he produced BOB AND THE MONSTER, about punk rock musician and recovery specialist Bob Forrest, which premiered at SXSW and screened at Hot Docs, Silver Docs, Sheffield and IDFA. He also served as associate producer on the feature-length documentaries BURN (2012 Tribeca Audience Award winner), about Detroit firefighters, and WE LIVE IN PUBLIC (Sundance 2009 Grand Jury Prize winner) and has worked on productions for networks and companies ranging from CNN, NBC, HBO and THX. Raised in Boston, Massachusetts, Austin is a graduate of Boston University and currently works as the official archivist for the Marlon Brando estate. 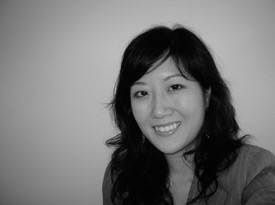 Joan and her company, Cherry Sky Films, have produced several critically acclaimed independent films and award winning documentaries
including: THE DIPLOMAT, a 2013 ESPN documentary about Katarina Witt; THE INEVITABLE DEFEAT OF MISTER AND PETE directed by George Tillman Jr., starring Jennifer Hudson and Anthony Mackie which premiered at Sundance 2013; A SMALL ACT, which was selected as one of 2010’s best documentaries by Roger Ebert and broadcast on HBO; IN THE REALMS OF THE UNREAL by Academy Award winning director Jessica Yu; and Justin Lin’s feature narrative BETTER LUCK TOMORROW which was acquired by MTV films at its 2002 Sundance premiere. Joan graduated from UC Berkeley with a B.A. in Mass Communications and minor in Asian American studies. 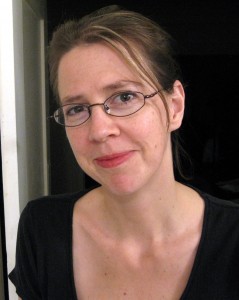 Kim Roberts is an Emmy winning editor of feature documentaries. Her recent work includes WAITING FOR SUPERMAN (Paramount), FOOD, INC. (nominated for a 2010 Oscar), AUTISM THE MUSICAL (HBO), and the upcoming INEQUALITY FOR ALL (The Weinstein Company). Kim won an Emmy for Autism the Musical, her third nomination. She was also nominated for an Eddie award for Food, Inc. and Waiting for Superman from the American Cinema Editors. Her other films include: Oscar Nominees and Sundance Grand Jury Prize Winners DAUGHTER FROM DANANG and LONG NIGHT’S JOURNEY INTO DAY; LAST CALL AT THE OASIS (Participant); TWO DAYS IN OCTOBER (Peabody and Emmy winner ‘06); MADE IN L.A. (Emmy winner ’09); THE FALL OF FUJIMORI (Sundance ‘05); LOST BOYS OF SUDAN (Independent Spirit Award ‘04); DADDY & PAPA (Sundance) and A HARD STRAIGHT (Grand Prize, SXSW). Kim received her Masters Degree in Documentary Film Production from Stanford University, where she won a Student Academy Award. She is an active member of the Academy of Cinema Editors (ACE). 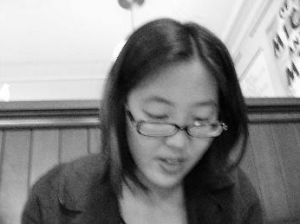 While pursuing a graduate degree at UCLA in Asian American Studies, Eurie Chung fell into community filmmaking, directing & editing “Metro es Para Todos: Hee Pok ‘Grandma’ Kim and the Bus Riders Union,” a documentary short, for her master’s thesis. Since then, she has worked primarily in post-production, editing commercials, promos and EPK work for Disney/ABC and Scripps Networks, while also continuing to work on independent documentary films. Currently she is producing Grace Lee’s documentary exploration into Asian American food and culture to air on PBS in 2014. 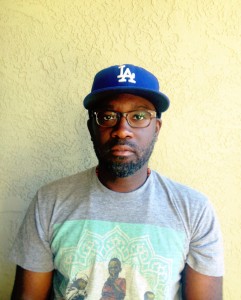 Jerry A. Henry received his MFA from UCLA Film School with an emphasis on documentaries, cinematography, and digital media. His credits include producer/ cinematographer for MTV News & Docs as well as programs for National Geographic, A&E, Bravo, VH-1, NBC, OWN and the Discovery Channel. He served as cinematographer for THE GRACE LEE PROJECT and David Zeiger’s SIR NO SIR! and WINTER SOLIDER as well as the Oscar nominated Banksy directed documentary EXIT THROUGH THE GIFT SHOP, JANEANE FROM DES MOINES, which premiered at the 2012 Toronto Film Festival and the music documentary KE$HA: MY CRAZY BEAUTIFUL LIFE set to premiere on MTV. He has shot and produced over 300 docu-reality television programs and documentary series for network and cable television. He is in post-production on his first feature-length documentary ECONOMY SUPERSTAR.

More About Jerry A. Henry 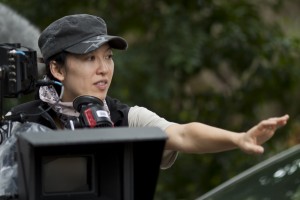 Quyen Tran started as a stills photographer, where her work has been published in numerous magazines and newspapers including the New York Times, USA Today, and Scientific American. Her work in photojournalism has greatly influenced her cinematography, where she seeks truth in images in both her narrative and documentary work. She graduated from UCLA’s Graduate Film school, where she earned Best Cinematography three years in a row. She has photographed films internationally–from South Africa, Thailand, Japan, China and Vietnam–as well as all over the United States. Her films have screened in festivals worldwide including Telluride, Tribeca, Sundance, Festroia and Toronto. Most recently, she wrapped a narrative feature shot entirely on location in Florida starring Anna Paquin, Cam Gigandet and Drea di Matteo. 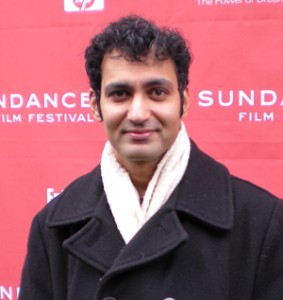 Vivek Maddala is an international award-winning composer and multi-instrumental performer. He has scored over 30 feature films, theater & dance productions, and TV episodes over the past decade. Although best known for his film scores, Vivek also writes, produces, and performs with various rock/jazz/world recording artists. He is a Sundance Institute Fellow for film composition, and recently had work premiere at the Cannes, Toronto, Berlin, and Sundance film festivals. 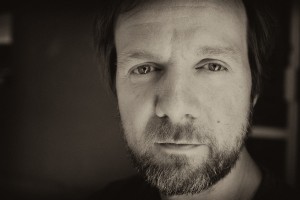 Pete Horner is an Emmy-winning sound designer and re-recording mixer based in Northern California, often working at Skywalker Sound. He has a diverse background in music, having studied percussion and music recording at the Cleveland Institute of Music, worked in a hip-hop studio for several years while playing in rock bands, all before starting a career in film at Francis Coppola’s American Zoetrope. He quickly embraced the musicality of film sound and by the end of eight years at Zoetrope had worked on many films including APOCALYPSE NOW REDUX, THE OUTSIDERS: THE COMPLETE NOVEL, and a 5.1 remix of THE CONVERSATION. After leaving Zoetrope, Pete has worked on such diverse projects as the children’s film HOW TO TRAIN YOUR DRAGON, and Errol Morris’s documentary about Abu Ghraib prison, STANDARD OPERATING PROCEDURE. In 2007, Walter Murch asked him to work as sound designer and mixer on Francis Coppola’s YOUTH WITHOUT YOUTH, and in 2009 as a mixer on TETRO. In 2012 he was the sound designer and mixer for Philip Kaufman’s HEMINGWAY AND GELLHORN, for which he won an Emmy.